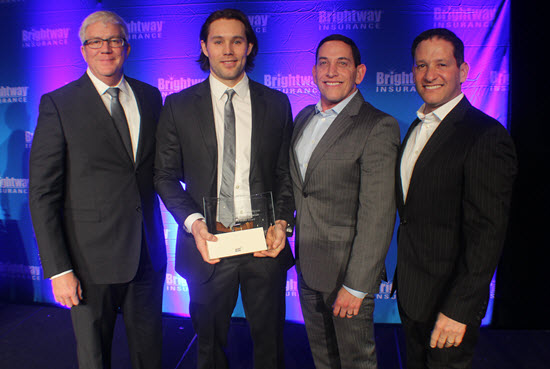 JACKSONVILLE, Fla. — Being a trailblazer isn’t easy, but you wouldn’t know that when you see the success Ben Rodriguez has experienced as Owner of Brightway, The Ben Rodriguez Agency in New Orleans, since he opened the store in December 2015.  Recognizing the achievements of its top Agents, Brightway leadership presented Rodriguez with its 2017 Mover and Shaker Award during the company’s annual Awards Celebration held Saturday, Jan. 20, at the Hilton Bonnet Creek in Orlando, Fla.

“We’re extremely proud of Ben Rodriguez and his team and look forward to this time each year when we recognize our top Agents like him,” said Brightway Co-Founder and Chairman, Michael Miller. “Brightway is a proven franchise system that provides an unparalleled, comprehensive system of support empowering Store Owners to outsell the competition three-to-one, grow their business and build an asset for their family.”

The Mover and Shaker Award recognizes the Store Owner whose store moved up the most number of spots in the total Brightway Commission rank in the calendar year. Rodriguez’s store that employs three people jumped 30 spots in the ranking in 2017.