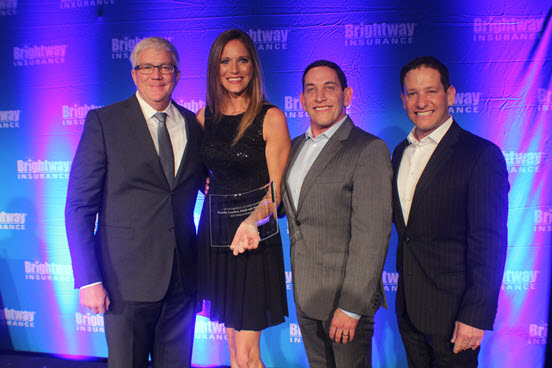 JACKSONVILLE, Fla. — Opening her second store in South Florida a month before Hurricane Irma hit with flood damage from the storm affecting her team’s ability to work in the office didn’t stop Brightway Insurance Multi-unit Owner, Kandie Landers, from having a stellar year. Landers, who owns Brightway, The Landers Agency with locations in Glendale, Colo., and Fort Lauderdale, Fla., went home with two of the top awards Brightway Insurance presented during the company’s annual awards celebration held Saturday, Jan. 20, at the Hilton Bonnet Creek in Orlando, Fla. Brightway leadership presented the 2017 Life Sales Award and the 2017 Referral Rock Star Award to Landers during the event.

“We’re extremely proud of Kandie Landers and her team and look forward to this time each year when we recognize our top Agents like her,” said Brightway Co-Founder and Chairman, Michael Miller. “Brightway is a proven franchise system that provides an unparalleled, comprehensive system of support empowering store owners to outsell the competition three-to-one, grow their business and build an asset for their family.”