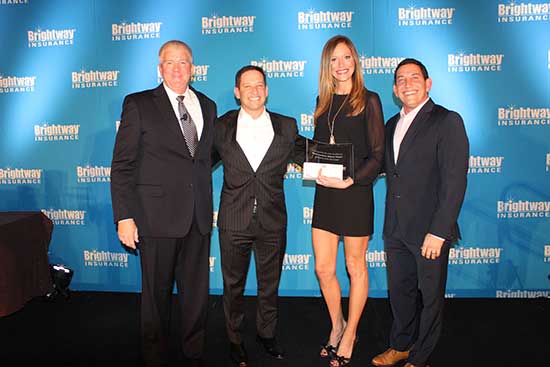 FORT LAUDERDALE, Fla. (AUG. 7, 2017) —Kandie Landers experienced so much success during her first year as a Brightway Insurance Agency Owner that she is already opening her second location. Landers, who opened her first location in Glendale, Colo. (a suburb of Denver) one year ago, now has a second location, Brightway, The Landers Agency, in Fort Lauderdale.

Landers, who received Brightway’s 2016 Rookie of the Year award, knows how to build an all-star team. The five-person team she has recruited and trained for the Fort Lauderdale location has 37 years’ combined industry experience and stands ready to exceed consumers’ expectations.

“Investing in a Brightway Agency has been the best decision I have made for my career and for my clients,” said Landers. “I get to own my own business, be my own boss and provide more choice and expert counsel than I was ever able to offer as a captive insurance Agent.”

Raised on a farm in Colorado, Landers earned a bachelor's degree in Exercise Physiology and Nutrition from the University of North Colorado in Greeley, Colo. She spent the next eight years in Texas as the Director of Operations and Franchising of a fitness franchise. In 2015, she pursued her passion of helping people and opened her own successful insurance agency with a highly recognized national carrier. She ranked highly among 18,000 agents and was the fastest growing agency in the Mountain Central Zone.

After working in the captive insurance market, Landers chose to join the Brightway family so she could provide her customers with numerous options as well as customized insurance coverage to fit each individual family’s needs.  She uses a consultative approach to make sure all of her clients have the total protection they need.

In addition to being the highest-producing Agency Owner who opened an agency in 2016 (based on total Brightway Commission), the Glendale Chamber of Commerce named Landers its 2016 New Member of the Year. When not in the office, she enjoys spending time outdoors with her husband, Ryan, and staying active in the local community by donating and volunteering with area charities, such as Warren Village Holiday Shop. Landers also works with local churches and organizations to conduct insurance educational seminars.

“Brightway Agency Owners are the face of our brand, so it’s imperative that we choose the right people to partner with to open new Agencies,” said Brightway President, Talman Howard. “Kandie Landers has been a true brand ambassador who has capitalized on her success as an insurance Agent with the full suite of support she receives from Brightway. We’re truly thrilled for her as she joins the ranks of Brightway’s multi-unit owners.”

Brightway Agency Owners enjoy support in customer service, carrier relationships, marketing, accounting and technology, which frees up their time to focus on leveraging the broadest possible selection of insurance companies to meet each customer’s unique needs. As a result, Brightway agencies consistently outsell other agencies two-to-one.*

Brightway Insurance is a national property/casualty insurance retailer selling through a network of franchised independent agencies throughout the country. With more than $470 million in annualized written premium, the company is one of the largest property/casualty independent insurance agencies in the United States. Brightway provides its Agency Owners with access to more insurance companies than any other agency, along with a comprehensive system of support that frees them up to focus on customizing policies that meet their customers’ needs.

Brightway began franchising operations in 2008 and has since grown to more than 700 people in 16 states serving customers in all 50 states. Forbes has recognized the company as America’s No. 1 Franchise to Buy. Additionally, the company was named a top franchise three years in a row by Entrepreneur magazine and one of the fastest-growing private companies in America nine consecutive years by Inc. 5000.

For more information about Brightway, The Landers Agency, visit BrightwayLandersAgency.com or call 954-519-5244. Learn more about franchise opportunities with Brightway at BrightwayDifference.com.