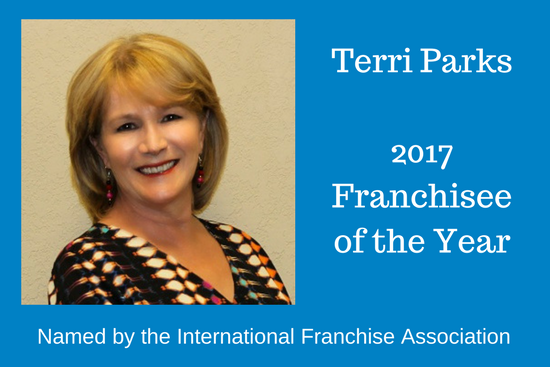 Brightway Insurance is one of the largest property/casualty independent insurance agencies in the country.

“In business since 2015, Terri Parks quadrupled her sold policies in the last year while making a donation to her community for every quote provided a customer,” said Brightway President, Talman Howard. “We’re pleased to nominate her for the award and to see her recognized by the world's oldest and largest organization representing franchising worldwide.”

“What an honor to be named Franchisee of the Year,” said Parks. “I’m thrilled at the success we’ve experienced in the last year and look forward to continuing to grow my business by offering consumers more choice in insurance brands and expert counsel.”

Brightway franchise owners enjoy support in customer service, carrier relationships, marketing, accounting and technology, which frees up their time to focus on leveraging the broadest possible selection of insurance companies to meet each customer’s unique needs. As a result, Brightway agencies consistently outsell other agencies three-to-one.*

As a result, they make more than three times the income of individuals who are self-employed in other businesses. And, top performers earn six-fold. What’s more, because of the quality of the Onboarding and Training processes the company has in place, having an insurance background is not a prerequisite to becoming a wildly successful franchise owner with Brightway. In fact, 40 percent of the above-average performing Brightway Agency Owners did not have prior insurance experience.

About Brightway Insurance
Brightway Insurance is a national property/casualty insurance retailer selling through a network of franchised independent stores throughout the country. With more than $477 million in annualized written premium, the company is one of the largest property and casualty agencies in the United States. Brightway provides its franchise owners with access to more insurance companies than any other agency, along with a comprehensive system of support that frees them up to focus on customizing policies that meet their customers’ needs.

Brightway began franchising operations in 2008 and has since grown to more than 700 people in 17 states serving customers in all 50 states. Forbes has recognized the company as America’s No. 1 Franchise to Buy. Additionally, the company was named a top franchise three years in a row by Entrepreneur magazine and one of the fastest-growing private companies in America nine consecutive years by Inc. 5000.