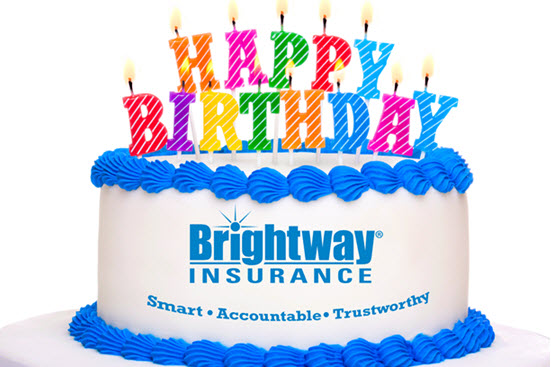 JACKSONVILLE, Fla. (Aug. 16, 2017) — Brightway will mark its ninth year in business on Sunday, Aug. 20. The company will celebrate the occasion with a birthday party at its headquarters location on University Blvd. West this Friday, Aug. 18.

Brightway is one of the largest Personal Lines insurance agencies in the country selling through a network of franchised independent agencies. Founded by long-time Jacksonville residents and brothers, David and Michael Miller, the company has a Win3 mandate that focuses on win-win-win outcomes for customers, Agency Owners and employees.

“Our goal is to be Americans’ No. 1 choice for protecting their families,” said Brightway Vice Chairman and Co-founder, Michael Miller. “Despite our beginnings in a mature market, we built our brand around a differentiated customer experience that provides more choice and expert counsel and stayed true to our vision. As a result, our Agency Owners continue to outperform other independent insurance agents.”

As a result of the company’s differentiated approach:

Since 2008 Brightway has grown:

All of this success results in many professional job opportunities. Visit Brightway.com to start or continue your insurance career.

About Brightway Insurance
Brightway Insurance is a national property/casualty insurance retailer selling through a network of franchised independent agencies throughout the country. With more than $471 million in annualized written premium, the company is one of the largest Personal Lines insurance agencies in the United States.

Brightway began franchising operations in 2008 and has since grown to more than 700 people in 17 states serving customers in all 50 states. Forbes has recognized the company as America’s No. 1 Franchise to Buy. Additionally, the company was named a top franchise three years in a row by Entrepreneur magazine and one of the fastest-growing private companies in America nine consecutive years by Inc. 5000. People wishing to learn more about Agency Ownership with Brightway may visit BrightwayDifference.com and find us on LinkedIn. Consumers seeking a better insurance buying experience may visit Brightway.com and find us on Facebook.

Brightway provides everything you need to grow your Agency as fast as possible, including: